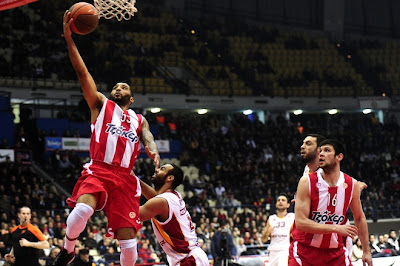 Οι απόψεις μας στο Eurobasket.com
Euroleague Top-16, Week 6: Our thoughts..
Matter of Rhythm
Big game in Peace & Friendship Stadioum between two hard nosed teams ,each of them wanted to impose it’s game tempo. Ivkovic started  his best perimeter defender now,Mantzaris,guarding Lucas and press the ball at 4/4. On the other side Mahmudi had prepare Koksal for the “mission imposible” of guarding Spanoulis. The Reds’s game plan was to run and score the less 80 points,a number that normally Galata couldn’t reach at SEF. That’s what they did on the 1st quarter ,almost perfectly. Leading by a very aggressive Spanoulis and Dorsey’s dominant presence at the paint, Greeks took an early lead and manage to score 24 in just 10’ against one of the competition’s best defensive teams. Mahmudi try to change the game on the 2ndperiod. He started Lakovic next to Arslan and Sumbert at “4” in an undersized lineup and implemented a 2-3 defense to slow the pace and control the paint. His plan worked . Galata played much better defense and came back to the game with Ivkovic’s team having problems to create especially without Spanoulis.
Key part: The “law in town” and the quarterback.. 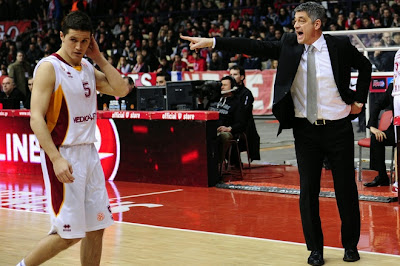 ( Mahmudi tries to give Lakovic the right game-direction)
When your point guard,from the top spot of your offense either drives deep in  the opponent’s “prepared” defense,passes wrong or shoots at the wrong time from everywhere, your defense usually has absolutelly no balance to resist in a fast break. No defensive transition at all. With Lucas injured and Arslan having problems too,Lakovic was an easy target for Olympiakos defense. 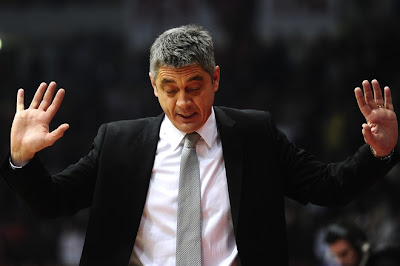 (Mahmudi qives up any effort to coach Lakovic)
The Reds took advantage the Slovenian’s predictable offense ,and hit on  transition a non-balanced defense with the specialist on the open court,Acie Law. Ex Partizan guard is more of a quality player on Olympiakos’s limited minutes compared with his presence in Sebia. Law now thinks more of his choises and the knowledge that he doesn’t have complete freedom gives him the feeling of a “creative pressure”. At the moment that the Turkish team had almost tie the game in the 3rd period, betrayed from their small-due to problems-guard rotation at the same time that Ivkovic had Spanoulis and Law on the court. . Gordon Lucas was awesome for one more game. In addition with Lakovic the American is a complete perimeter player ,a  true quarterback for Mahmudi’s team,solid in both ends of the floor. His value now is even bigger in the European basketball stock..
Copying a legend 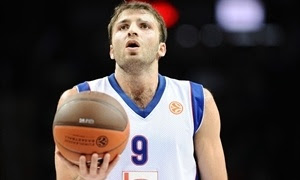 Seeing Manuchar Markoishvili (196-G-86) shooting style turns me back in time and reminds me -in a ridiculous way- Sasha Danilovic. Just notice the way he receives the ball, his legs and of course his hands and release. Cantu’s guard-forward must have spent thousands of hours watching videotapes with the Serbian legend, again and again.. The thing is that in Kaunas the Georgian had his own legendary night scoring 32 (5/10 3pt) against Zalgiris and ranking 1stfor the “MVP of the week” award. Cantu proved that has nothing less than a playoff team. It could easily be on the post season.. 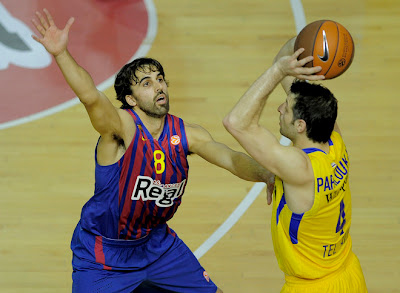 Maccabi proposed recently Richard Hendrix a new contract and the American forward-center celebrate it with a huge performance on Palau Blaugrana, although it wasn’t enough for his team to win. It is rumored that Real Madrid prepares a proposal for Hendrix (3 years/3millions)too, but right now the player is closer to Maccabi. Keep in mind that another dominated-undersized center, Marcus Slaughter is the ‘balader’ in this case.. 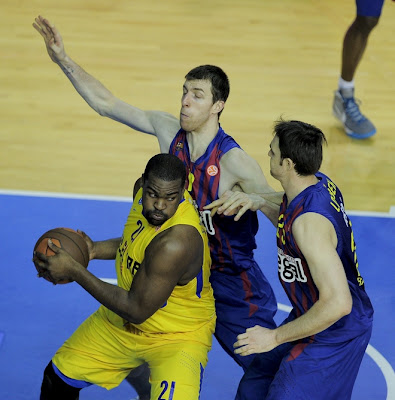 Pasqual didn’t use Navarro after some discomfort on the leg, plus Eidson permanent absence so it was time for Pete Mickeal to show his leadership. Barcelona doubled Schortsianitis in the post and that was the best practice for Sofo’s passing skills and attitude in double team situations. It’s a piece of his game that needs to work although the last couple of years has really been improved. Blatt tried to keep his team close with his favorite match up zone and he manage to control game’s tempo and slow the pace,knowing this is the way to have a shoot for the win. With Blu out, he used Hendrix next to Sofo at “ 4” spot, something that is not so common this year. Barcelona dominate the boards and that was the key part of the game (44-30) although they turnover the ball 18 times and Maccabi had more possessions. Except Mikael ,Marcelinio Huertas was desicive for Barcelona ,with Pasqual spliting equal the playing time for everyone, giving Rabaseda 15’ and the youngster Jose Perez 5 minutes. Both teams need a lot of work, due to a playoff series with the Catalonians being the favorite against Kazan and David Blatt’s team prepare for the rivalry against Panathinaikos.
“Defending” champ 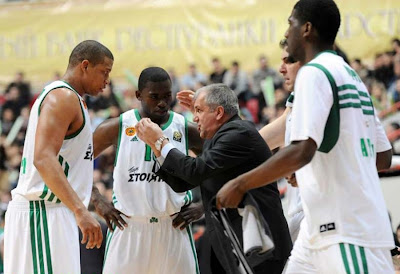 Obradovic tried to give a sense of freshness to his team starting the game without Diamantidis-Batiste and Sato and by putting Maric at “ 5” to match Jawai’s size. The greens’s defense target on Henry Domercant. Zots put Kalathes on him with the order to play “deny” on a one-pass distance. Domercant had big difficulties to receive the ball on a hot-spot,practically he couldn’t breath from Kalathes pressure but his experience and quality made him think and not take hasty shots. Kelly McCartys’s defensive plays give a boost to Unics. Panathinaikos played great defense on the second quarter, using zone press and changing on man to man under circumstances. It was interesting how they put the “red hot” Leen Greer in a “cold ice” situation. Although Greer found Jasikevicius to defend him, he didn’t manage to hit in Lithuanians slow legs due to the immediately help that was offered to Saras from his closest teammate,exactly the time that Greer was starting his way to the rim. As a result Unics didn’t take advantage the isolations that uses for Greer. Pashutin facilitated Obradovic’s plans by putting Samoylenco on the court, cause Saras could defend the Russian guard. In this part of the game,Lyday’s absence was obvious.
Moneyball 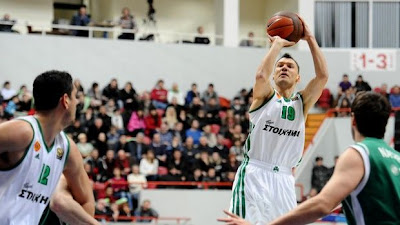 Those games justify why Zeliko Obradovic insisted for the sign of Jasikevicious  last summer. Saras is like a “secure” for the big games. After his “in all-zero” performance against Milano last week the Lithuanian clinched the win for Panathinaikos with his incredible speed of thought and mentality. The way he found Maric alone for consetitive baskets in crucial moments proves that he remains the best “pick n roller” on Europe . His speed of thought is faster than any other baller’s legs and that’s why Saras can still make the difference on 1-2 regular season games and all the playof’s games that his coach really needs him through the season. Although Domercant could score even with 0.5’’ given time, Panathinaikos took the gold win and home court advantage for the post season. Unics qualify to,after Armani Milano’s win against Fener. That was the fairest result for the group..
ΔΙΑΒΑΣΤΕ ΕΔΩ ΟΛΑ ΤΑ ΣΧΟΛΙΑ