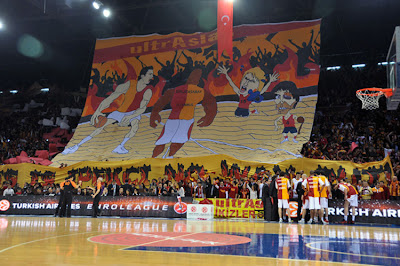 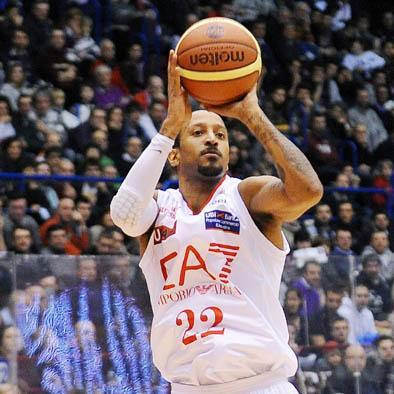 -There were a lot of people who believed that Unics wouldnt manage to respond at the first ‘real difficult on the road-game’ of top-16. Let me tell it clearly. The first on the road game with r-e-a-l pressure to win. At OAKA the game was one of those that coaches are calling ‘easy’,because you simply dont have any pressure to win. Those people vindicated by the result at the empty Mediolanum. Milano is clearly better team after the sign of J.R. Bremer . I watch them on Sunday at PalaMalaguti (or..Unipol Arena) against Bologna.Bremer brings to the table an ‘a little bit of Nicholas’ and a little bit of Cook combination with his ability to hit all the deep shots and create for his teammates. Omar Cook was the key for Sergio Scariolo with his almost perfectly prepared and executed defensive effort against one of the leagues hottest players,Henry Domercant. Cook is known for years as one of the best on the ball defenders on Europe . He used his physical strength to compete when Domercant tried to post and chased Unics scorer frantically around the screens,succeeding not to receive the ball in the spots that he wanted. That made the whole Domercants scoring effort very difficult finishing with 2/9 FG. Both teams went on their loved slow pace with very few mistakes. Scariolo played small ball having Cook-Bremer-Nicholas at the same lineup with Mancinelli and Rocca at the frontcourt at the last period. Italians closed and pressing defense revealed Unics offensive weaknesses while the Russians couldnt break down the opposite defense shooting 2/18 behind the arc and having troubles with Roccas & Fotsiss aggressiveness in the paint. Pashutins team finished with 19/57 FG showing striking weaknesses on offense in Domercants bad night. Otherwise Unicss luck will be identified at the home game against Panathinaikos. Milano saved its owner with the first win in the top-16. Too bad because its obvious that if they had Hairston healthy and Bremer from the start of this round they could be more competitive.. 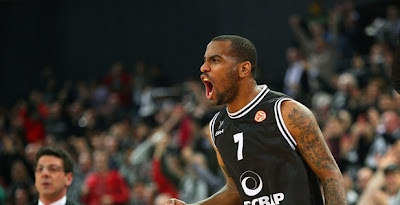 -On the other hand I dont think that many people believed on that kind of outburst from Bilbao against Real Madrid. Both teams having something like a playoff series while they face each other for third time in a week. The thing is that this result stands decisive. Coach Katsikaris made a miracle showing at the crowed arena the character of the last years acb finalists. True passion,shine in the eyes,tremendous work physocologically from Bilbao s coaching stuff. It is not used for a team to perform like this for 40′. Bilbao isn’t the most up tempo Spanish team. It’s offense based on the half court and in set up situations (were Mumbru & Banic are very productive with their clever game) but Katsikaris’s team can respond on a faster style too,especially when Aarron Jackson is on the court.The American point guard (one of the best one on one players in the league)put his high speed on the floor utilizing Fisher’s and Hervelle’s quick legs (on both transition & half court offense) and Vasiliadis shooting sharpness (5/6 3pt.) giving Bilbao a big early lead. The Basques were so agressive that they manage to put their enthusiastic fans completelly in the equation of the game. Real lost more than a game at Bilbao Arena. It lost the character that was building so hard all the season. Laso’s team lost it’s clear mind early in the game. The mind to defend and attack. Merenges won the battle of the rebounds (41-30) by taking 24 (!!!) offensive boards but their shooting percentages were dispiriting. Just 24/75 FG (16/50 2pt.) vs Basques’s 35/53 FG (27/37 2pt.)..Coach Katsikaris strangulate Real by holding the best offense in the competition to 69 pts. and to those kind of percentages. The only encourage thing for Laso is Novica Velickovic performance 17pts. in less than 22′). Real now has to fight for the win at Palaestra to have serious chances to qualify to the playoffs. Contrary Gescrap BB normally will need one win for the dream. Qualifying for the playoffs would be a prize equal with last year’s ACB performance.. 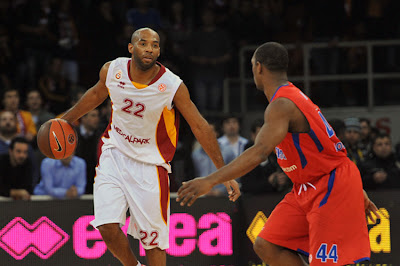 -Jamon Gordon starting his greek carrer with the refund of 120.000 $ at Marousi in Euroleague,2.5 years ago.Olympiakos signed him with a 250.000$ contract and lost him next year (although he was Reds’s best player in the playoffs against Montepaschi) by Galatasaray which is thrilled that gave him 800.000$ (Greek media consider that his real refund is about 500.000$..) I don’t know what would be Gordon’s price on the market after those two extremelly performances in two top-16’s close games,against Olympiakos and undefeated Csska Moscow. Gordon was huge again at the crunch time scoring crucial points.Coach Mahmuti had a brilliant tactic game.He manage to succeed in a point which no one did it before by intercepting Csska’s inside game (12/32 2pt.) At the same time he took an outstanding performance from Joshua Shipp who lead his team on offense. Mahmuti didn’t gave Shumpert a lot of time at ”4” spot as usual due to the physical atributes of the Russians forwards but he risked with the 21 year-old Huseyin Koksal,giving him 19′ and a perimeter defensive mission.Csska had a wired night.Bad transition defense which allowed important points easily to a team not exactly ‘expert’ on this.That means lack of concentration. Many coaches feel more ‘comfortable’ having 1-2 loses before they go to playoffs or the final4..Congratulation to Galatasaray’s incredible fans and atmosphaire. The most important thing for their team after this big win is not granding.It’s 1st) about making a great memory and 2nd) buildind their faith for the ‘war’ at Peace and Friendship Stadium against Olympiakos. Galatasaray can be a -mentally-stronger team if they use correctly the Thursday’s game. 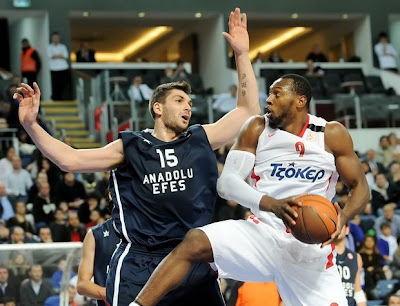 -Details have huge importance on this level. And they usually separate great coaches from good or just talented. Olympiakos win against Anadolu was 100% Dusan Ivkovic’s creation. Being for years one of the best coaches around in preparing his teams for big matches,the Serbian professor outscored Sarica from the first minute. The Reds imposed their tempo by playing freat defense with Jo Dorsey dominating the rim. Sarica tried to take the ball off Spanoulis hands by traping him with his centers in the corners but the Greek star quickly read the defense and create good looks for his teamates by moving the ball directly. This game is the largest proof about the change in the mode of Olympiakos which remains Spanoulis’s team but it’s able to win without his points. Everyone talks about Kostas Sloukas the last month but quietly Kostas Papanikolaou has been a big force for Ivkovic. The 22 year old forward was everywhere in the court at Sinan Erdem. The last couple of months Papanikolaou produces tones of energy and plays with great passion like a true warrior. It’s obvious at Greek league’s matches (in the most of which Olympiakos hasn’t difficulties)how concentrate and competitive he is. He is trying to prove that he is the best forward in A1 at both ends of court. The Turkish team was simply bad especially at cooperation level. The last two minutes outburst was result of the survival instinct in front of a lost state. Even when they totally came back Sarica made mistakes and didn’t pay attention to the details. They fouled Sloukas (the opponets most cold-bloud player) in a situation that seemed they didn’t want to foul. Anadolu’s players get back to the court after the time out without a clear plan. On their final attempt to win the game they choose -correctly-Lafayette for the game winner but they didn’t plan a good situation for him to score. Clearly luck..

-After the previous game at PalaDesio everybody in the city of carpenters understood their big achievement. They had put fear to the team with-probably-the most fearless arena in the league. Coach Trinchieri’s team has our fully respect. A group of hard workers with strong willingness and persistence fighting every game till the end. And that’s what they do at Nokia Arena.Sticking to their plan and pass the ball inside to Shermadini,taking advantage that Schortsianitis was influenced from his recent injury. Gianluca Basile shined and Trinchieri based Cantu’s offense to his stroke and personality. (that for what they brought him back to Italy) . I don’t know what David Blatt told to his players about the 41 points they allowed to their defense. I imagine him clenches his hands into fists,hopping up and down screaming to weak them up. But he didi it.. Maccabi came out and play ”the perfect defense” at the 3rd period,allowing only 5 points and neither a single field goal (0/11 for Cantu ). David Blue with some desicive shots warmed Nokia Arena and the whole game’s challenge has changed since both teams had Cantu +8 in mind. Keith Langford was the go to guy when everything were on the line and Richard Hendrix was decisive at the rim. That’s why Blatt is planning next year’s team with those two pillars. The second half must lead Maccabi to the next day. This defensive effort is the key for a succesfull run from now on. A guide for the future. Cantu has its chances as faces Barcelona at PalaDesio next week. The Eagles will be there so the playoff qualification. A home win makes Trinchieri’s team a favourite.Difficult but not impossible..